Can we get inline comments implemented in the PGN viewer? [Done!]

EDIT 9/19/14: As noted in the answer below, this has now been put into effect on the main site, so annotations can be included with PGN games/variations.

A while back we got Andrew's fantastic PGN viewer implemented on the main site, and I think it's safe to say that has greatly improved both usability and aesthetics around here. But there are features built into the PGN viewer that didn't get implemented when it got set up initially, and one in particular that would be another great leap forward if it became functional is the ability to display inline comments/annotations that are included in the PGN. (Examples of this and other existing features yet to be featured on the site can be seen at Andrew's github demo page.)

The reason this particular feature is so crucial is that it would greatly enhance the ability to offer thoughtful, verbal explanations along with concrete variations and analysis in answers. As things currently stand, that's quite a difficult thing to do; one is basically forced to clumsily approximate chess-book-style typesetting, e.g. as in this old post of mine, and maintaining/conveying clear lines of thought is much more taxing than it should be. (More than that, I think it's simply not possible to structure things on the bare, linear page in such a way as to be comparable with when comments are directly linked to the moves contained in the richer tree structure of a game and its variations.) All of this means it's very hard to have threads that get into any truly detailed analysis of particular positions, which I think means the site is missing out on a whole swath of potentially meaty and interesting questions/answers.

In the earlier thread requesting implementation of the PGN viewer, I made a comment to the effect that while we could talk about chess without a PGN viewer on the site, we couldn't really talk chess. That dramatically improved with the addition of the viewer, but I still think this additional feature would increase our ability to communicate in chess terms as much again as that initial implementation has. It seems recently that the site is attracting more visitors (including several strong players whose chessic thoughts I for one would like to enjoy as fully as possible), and I'd like for all of our users to be able to share as much chess content as possible in their contributions to the site. It would make the site just that much better, and would also serve to draw in more folks who might appreciate this unique place.

Long story short: can we get the inline comments feature of Andrew's PGN viewer implemented on the main site?

Basically if there are no comments, the re-player will appear and operate identically to how it did before my changes. If there is at least one comment in the replay, the appearance will be as follows: 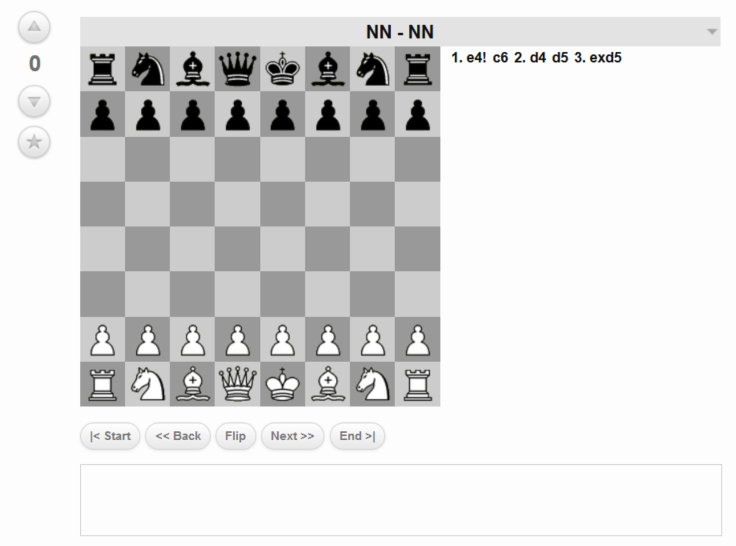 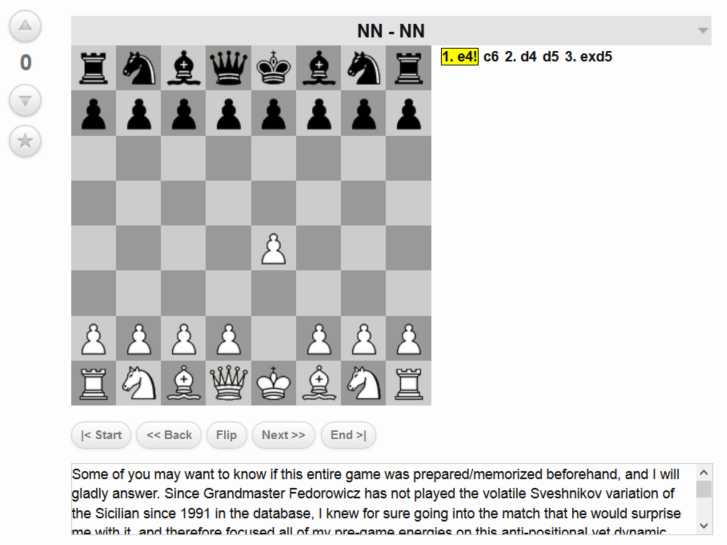 Let me know if you encounter any issues with it!

Not the answer you're looking for? Browse other questions tagged .

Welcome!
This site is for discussion about Chess Stack Exchange. You must have an account there to participate.
Help

57
Can we implement a replayer for chess analysis on the site?
17
We need more questions, what kind of question should we be asking more?
4
Highlight squares
2
Why don't we use this board instead?
1
How to add comments/annotations in the replayer?

57
Can we implement a replayer for chess analysis on the site?
2
Why don't we use this board instead?
10
Can the opening questions on this site be connected to an opening tree search?
19
Should the help section have a PGN viewer tutorial?
-1
Make discussions a specific part of Chess.SE
3
PGN viewer menu is hidden behind the navigation bar
3
Diagram viewer bug: starting moves greater than 9 do not work
3
Replayer Sandbox
0
Proposal: replace current PGN viewer