How do I add a replayer to my post?

How do I add the replayer to the post initially, and what additional features can I take advantage of?

NOTE: if you have a question about why the replayer isn't working for the PGN in your post, it's better to ask a new Meta question instead of posting an answer here.

This post is a work in progress, please feel free to add or embellish...

Most of the details here come from balpha's post.

There are two basic ways to use the replayer: first, you can use the replayer to simply display a FEN position, and second, you can post a pgn game and then others can click through the moves.

In order to simply show a position, just post the FEN string in a code block. It will automatically be converted into a diagram. 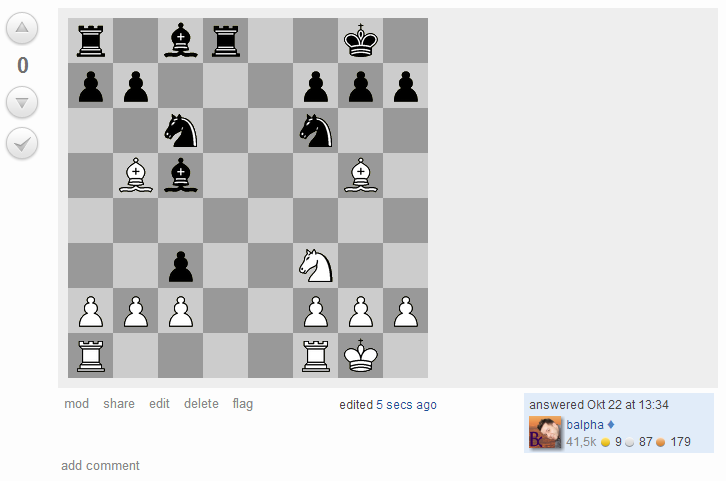 In order to display an entire game, you can post the entire pgn in a code block. Most chess software allows you to copy/paste the pgn from a game, but wikipedia also has a good summary if you want to just type the pgn yourself.

There is one caveat - the pgn you post must include a FEN header.

This was done in order to create an "opt-in" experience for the replayers (i.e. only display a replayer if you actively choose to have one), but this is open for debate.

As a shortcut, if you are starting from the start position, you can just include a blank FEN header:

It is possible to enter entire variations and annotations for your games as well. If you simply copy/paste a pgn file from your external program, it will usually work correctly (after you add a FEN string). In order to enter variations, you can use parentheses for the variation moves. You can enter comments in curly braces too:

Variations can be nested as well.

Anyone got a clue why the (3rd) replayer there is not working ?

I tried fiddling a lot with it, the position looks fine (if I remove the moves, it displays fine, looks legal to me, etc.), and I retyped the moves many times, tryed to mess with the move number, to no avail. The first move in itself (11. Rc3) is not accepted, and actually ruins the display of the position.

I noticed one more feature that has been missed out from your list but I have no idea how to annotate it, so will appreciate it if someone can fill the blanks in.

How can you specify which position is the current relevant one that you want the starting from. e.g. If I have imported a PGN (to include the entire game as reference) but I'm only interested in replaying the last 5 full moves, how can you jump to e.g. move 55/60 upon loading?

What am I doing wrong?
Why is this: Why is pawn to d3 the best move here? pair of replayers ignoring the FEN header? (Mine is the comment comparing ... Kg7 to ... f5).

Not the answer you're looking for? Browse other questions tagged support faq pgn-viewer .

3
How to use pgn viewer
1
How do I insert a PGN?
0
Documentation for embedding a game?
0
For us really old folks, how do you put those diagrams with moves in a question or answer
0
how do I create a position with the chess board?
55
Can we implement a replayer for chess analysis on the site?
18
Should the help section have a PGN viewer tutorial?
4
Replayer Sandbox
13
A list of “unknown” features of the replayer
5
Sandbox post; do what you like here if you want to test out formatting, etc
See more linked questions

10
How does the site's new PGN viewer work?
3
How to insert move comments in the replayer
6
How do you create/add new tags on chess stackexchange?
21
Can we get inline comments implemented in the PGN viewer? [Done!]
4
About reviewing questions
1
How to add comments/annotations in the replayer?
18
Should the help section have a PGN viewer tutorial?
13
A list of “unknown” features of the replayer
4
Replayer Sandbox